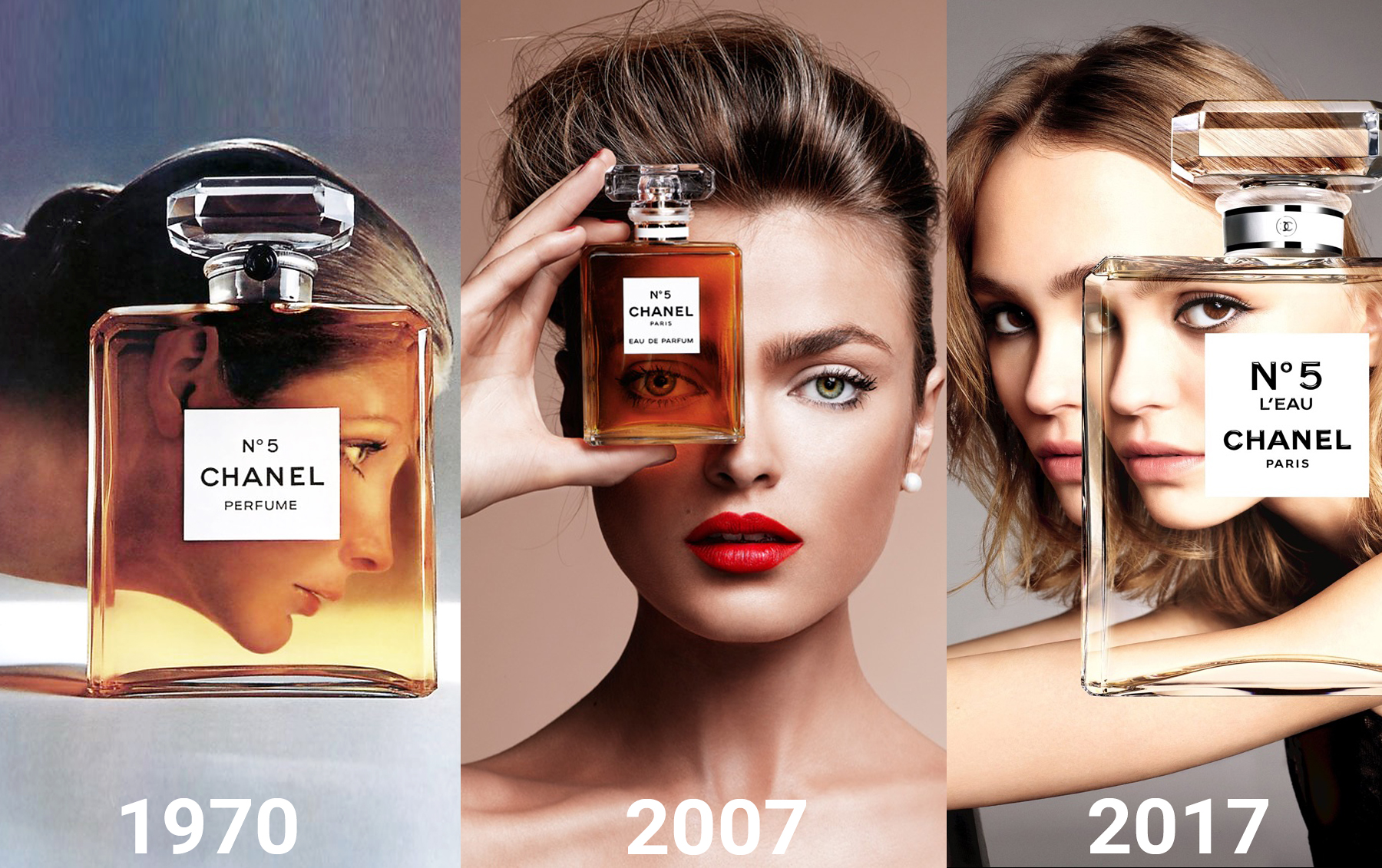 One of the most remarkable accounts in the history of beauty marketing is the way Chanel answered the crisis N˚5 faced in the early 1970’s. For decades thought as an epitome of exclusivity the perfume then run the risk of being perceived as outdated.

Management understood the situation more as an opportunity than a predicament and took insightful action to restore its prestige. The 1974 campaign was as visionary as it was successful. It saved the world’s most famous perfume and set the marketing direction the brand follows up until today.

The price of success

In 1921, when Coco Chanel launched N˚5 her marketing strategy was what we today would call BTL. She would invite a small group of high society friends to dine. At some point during the evening she would surprise everybody by spraying them with the perfume and give away a few bottles. To create consumer awareness, she infused the boutiques’ dressing rooms with the scent.

It worked! Among the small circle of Parisian high society Chanel No. 5 become an immediate success. Coco’s friend, Misia Sert said: “A bottle was like having a winning lottery ticket.”

It was not until 1924, when Parfums Chanel become a corporate entity, that expanding sales beyond the boutiques become a goal. With the idea of replicating the sense of scarcity that made it a success in Paris initial advertising in New York was discreet, sporadic and deliberately limited.

The first ads appeared in “The New York Times” in 1934. However, in subsequent decades points of sale would multiply and marketing aimed to appeal to increasingly larger audiences. The original message was lost and by the late sixties the perfume’s allure of sophistication had all but disappeared. N˚5 run the risk of being identified as a mass-market fragrance.

In 1974 Abba, with the song “Waterloo”, won Eurovision. A few months later Germany would win its second World Cup and at Chanel Alain Wertheimer assumed control as CEO. Mr. Wertheimer recognized the potential of N˚5 had to be transformed into an icon and without delay put in action a plan that would transform the perfume from a stumbling product into the cornerstone of the Chanel brand.

Achieving this goal required an overall change in direction that risked losses to achieve long term rewards. To recapture the perception of exclusivity he removed N˚5 from drugstore shelves and cut the number of outlets carrying the fragrance from 18,000 to 12,000. Marketing would reflect Coco Chanel’s original vision of glamour and sophistication. Its long-range purpose would be to keep the perfume at the top of the industry.

Perhaps his boldest move was to do away with outside advertising agencies and put in-house artistic director Jacques Helleu in supervision of all creative decisions, including advertising.
It may have proved to be his most insightful; for the next forty years Helleu would create the images that helped established Chanel as one of the world’s most prestigious consumer brands and influence the visuals of luxury marketing in general.

Coco Chanel wanted a design for the bottle of N˚5 that could be the antithesis of the style in fashion in 1921. She chose an unpretentious container that was about “pure transparency …an invisible bottle”. Fifty years later, it was in this description that Helleu found the inspiration for the images that would restore the brand.

The simplicity of the idea made it appealing, Helleu’s execution of the concept was extraordinary. The campaign did not use slogans, ads run without headlines or copy. Black and white photographs were printed in high-contrast creating an impression of simplicity and clarity.

For his first campaign Helleu chose to work with photographer Richard Avedon. Avedon believed that a successful marketing image needed to have an underlying narrative that wasn’t about selling but rather to create an overall spirit that would help connect with the moment in the photograph. One of his techniques was to give a humanistic feel to his photographs by featuring the personality, including flaws, of models.

Catherine Deneuve was the face of the brand for the start of the new era. Deneuve, then thirty years old, was little known in the US but her participation in the N˚5 campaign would make sales soar and for the American press to nominate her as the world’s most elegant woman. After her commitment to Chanel the French government chose Deneuve to represent Marianne, the national symbol of the Republic.

Through the 1970’s the collaboration of Helleu, Avedon and Deneuve would create images of exceptional simplicity and grace, some of the most powerful and enduring photographs in the story of beauty marketing.

And whether it was because of the increase in sales or of the big public approval that the campaign met; Chanel decided to extend the concept beyond the Catherine Deneuve tenure. As it turned out, the concept would be extended indefinitely. From 1974 until now marketing images for N˚5 has been based on the ideas that Helleu and Avedon developed for the first campaign. Key photographs allude to elegance – the simplicity of Avedon’s style adds them sophistication. Secondary images were used to feature the personality of Deneuve or to use the visual characteristics of transparency to insert a whimsical mood in the message.

In subsequent campaigns Helleu would create variations of Avedon’s photographs. His collaboration with exceptional photographers and prominent models always kept the framework fresh. Chanel’s marketing visuals become a harmonious and unbroken narrative told through the years. Older photographs giving depth to the newer ones making the style recognizable and timeless. Chanel insulated from passing trends; its message for classic elegance intact.

Jacques Helleu died on September 2007. He joined the house of Chanel, where his father had been working since the 1920s, in 1956 at the age of 18. He was the leading force behind Chanel advertising for four decades. His vision and ability to direct talented people without getting in their way produced extraordinary marketing images. His work helped made N˚5 synonymous with elegance and Chanel to be recognized as the ultimate house of luxury. 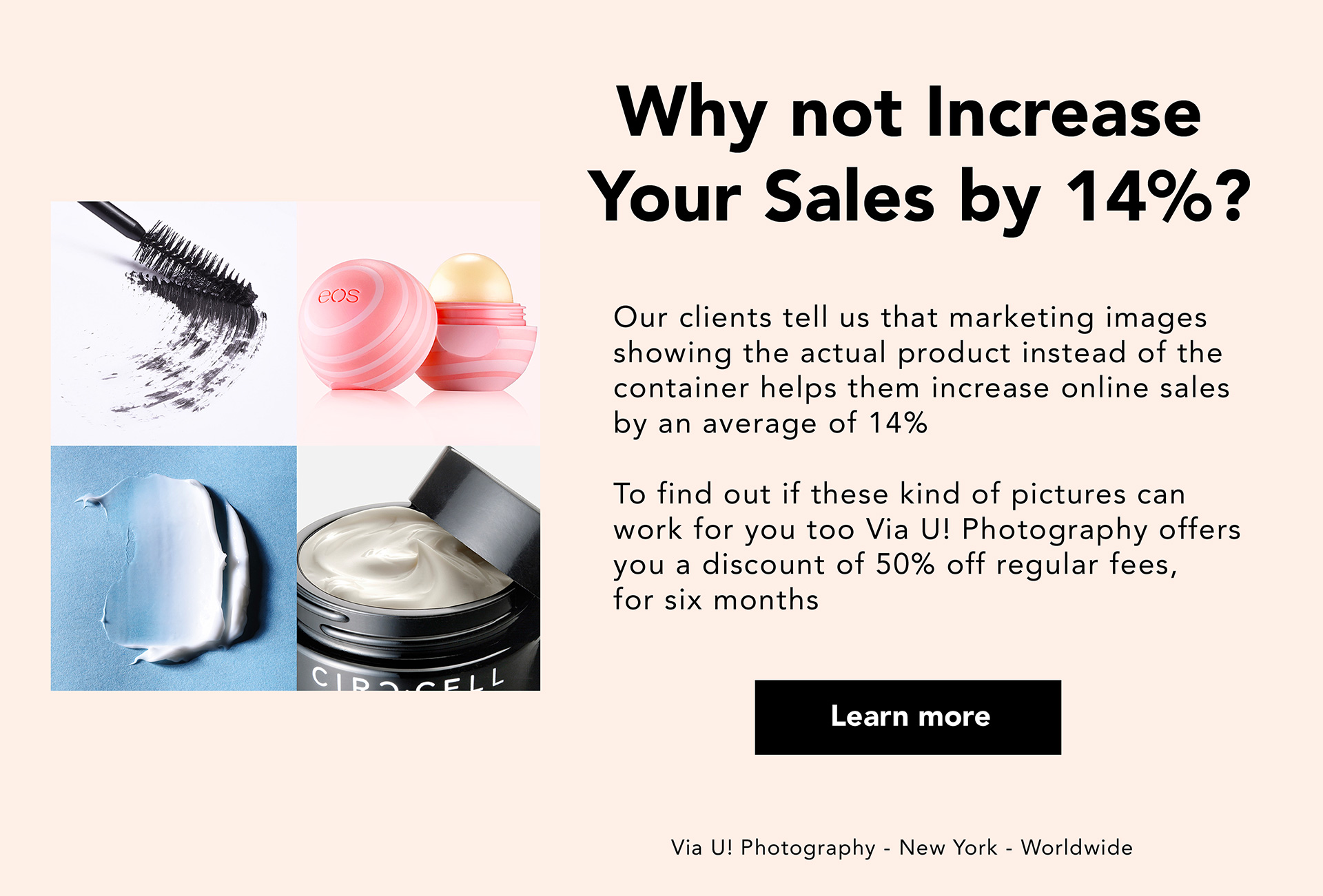 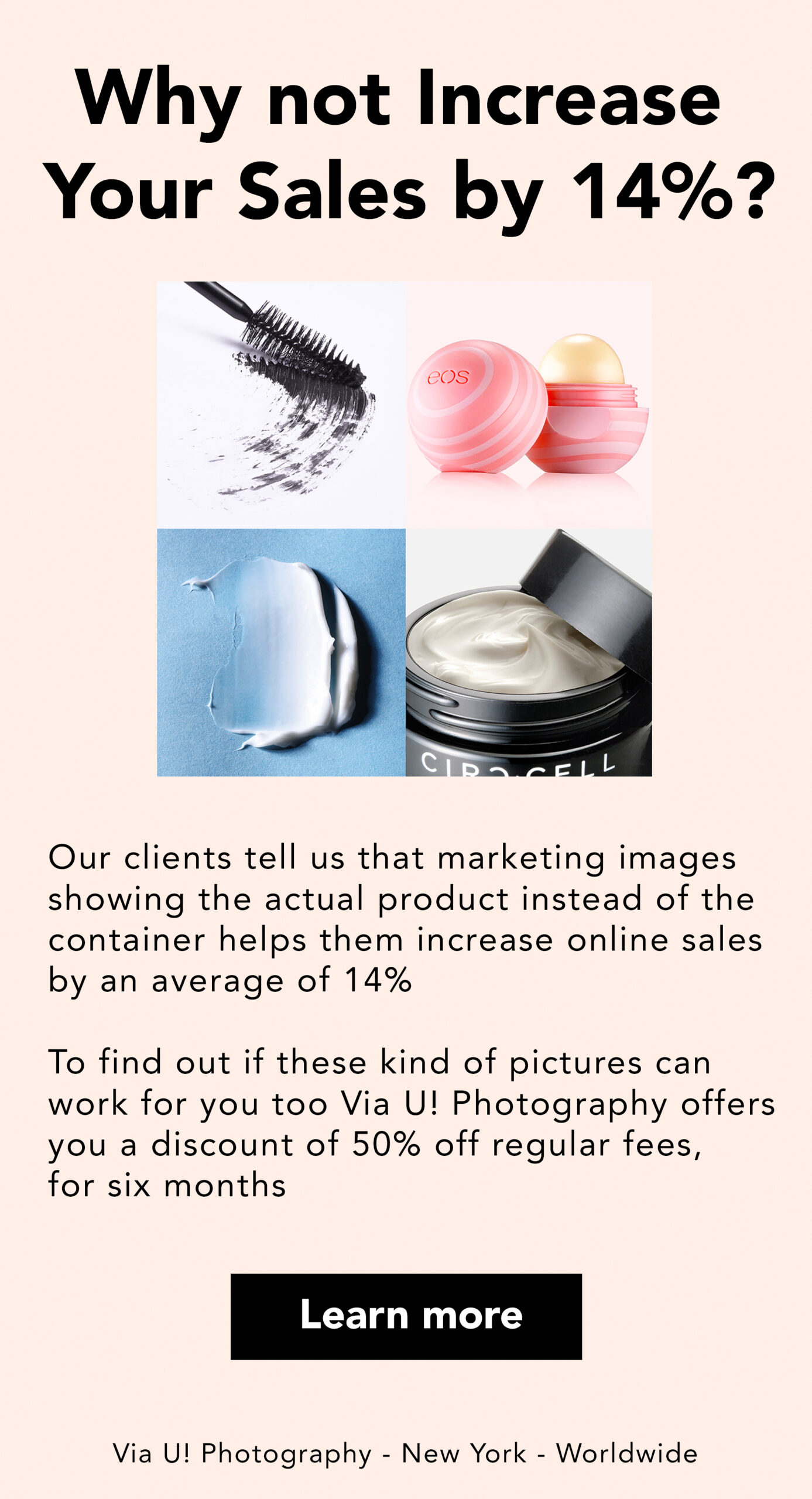 Mariano Pastor
General Manager Via U!

What color
would help
your
brand
stand out?

Via U! creates beautiful marketing images in every color of the rainbow, including white, at a price everyone can afford.

The end of the white background?

The white background has been an e-commerce standard since Amazon and eBay first launched in 1995. Today, …

Across cultural lines, and continents, the color white is associated with purity and the truth. Established beauty …

The Making of an Icon

Over the past 25 years, the most important influence to the aesthetics of marketing has been Photoshop. Introduced …

Do you want
your brand to
look
extraordinary?

We could have a conversation to explore how to get the most out of your budget. How to create photography that speaks for what is that makes your brand special. It could be that we come up with ideas that make your visual messaging stronger and your products look fantastic.

It’s a small world. You can collaborate with us in New York, from any town in the world you call home, as if we were next door neighbors.

Start by choosing a style

We renew options often. If you want a background not featured in the website, ask us, we'll get it for you.

You can ask us to change a background and make it darker, lighter or have a different color.

Give direction to our photo

Take a picture to show us how to photograph your product.

Get your finished photo delivered in multiple formats ready for use.

Powerful marketing images at a price that ﬁts your budget – Everywhere around the world.

Via U! creates beauty and product photography, video & motion. 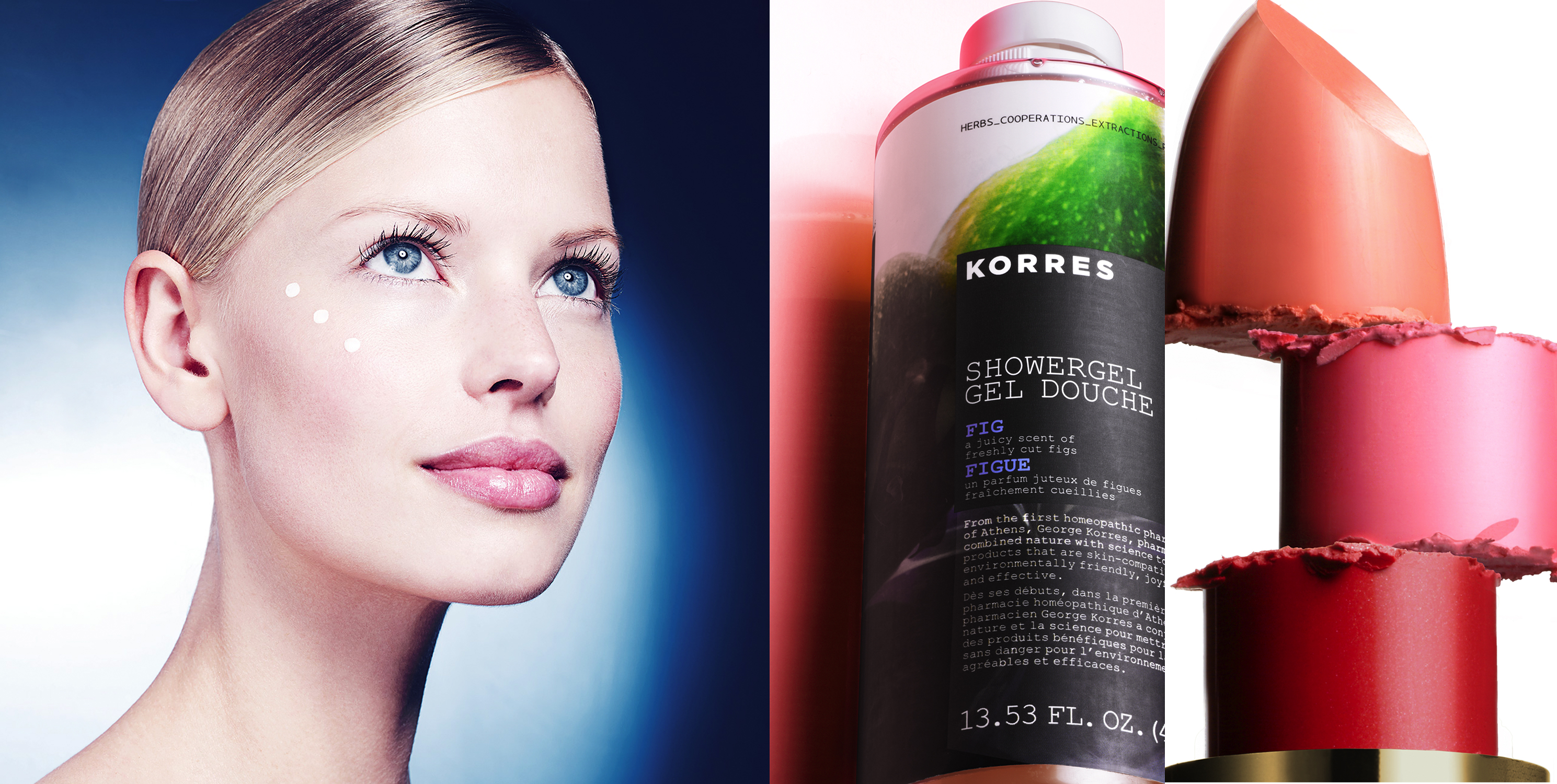